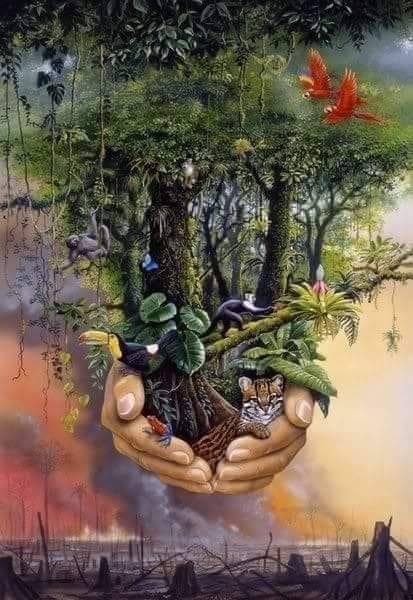 I have worked for worldwide rainforests since 1979. Although many of our efforts succeeded, for every forest saved 100 have disappeared. Clearly, you can’t save the planet one forest at a time. It’s one green Earth or a bowl of dust. Without a profound change of consciousness, we can kiss the forests goodbye, the ones we’ve “saved” alongside the rest.

Deep ecology is key to the change we need. To deep ecology, underlying all the symptoms of the environmental crisis lies a psychological or spiritual root – the illusion of separation from the rest of the natural world which stems from anthropocentrism or human-centeredness.

Conditioned since the Old Testament to “subdue and dominate” nature, the modern psyche is radically alienated from the air, water and soil which underpin life and this is reflected in the rapid shredding of all-natural systems in the name of economic development. Deep ecology reminds us that the world is not a pyramid with humans on top, but a web. We, humans, are but one strand in that web and as we destroy this web, we destroy the foundations for all complex life including our own.

While we maintain a self-image created in the matrix of anthropocentric culture, a shrunken and illusory sense of self that doesn’t include the air and water and soil, we will experience nature as “outside” our self and fail to recognise that nature “out there” and nature “in here” are one and the same.

Many people INTELLECTUALLY realise that we are inseparable from Nature and that the sense of separation that we feel is socially conditioned and illusory.

But as the late Arne Naess, Emeritus Professor of Philosophy at Oslo University, the man who coined the term “Deep Ecology” wrote: “it is not enough to have ecological ideas, we have to have an ecological identity, ecological self“.

But how can we nourish our ecological identity? In answer to such questions,  Joanna Macy and I developed a series of experiential deep ecology rituals called the “Council of All Beings” and in 1986, with Arne Naess and Pat Flemming,  wrote a  book called Thinking Like A Mountain – Towards a Council of All Beings (which has been translated into 12 languages). Along with others, we have been facilitating these workshops around the world since then.

In this workshop we remember our rootedness in nature, recapitulate our evolutionary journey and experience the fact that every cell in our body is descended in an unbroken chain 4 billion years old, through fish that learned to walk the land, reptiles whose scales turned to fur and became mammals, evolving through to the present.

We further extend our sense of identity in the Council of All Beings itself where we find an ally in the natural world, make a mask to represent that ally, and allow the animals and plants and landscapes to speak through us. We are shocked at the very different view of the world that emerges from their dialogue. Creative suggestions for human actions emerge and we invoke the powers and knowledge of these other life-forms to empower us in our lives.

One of the rituals we will share is honouring our pain for the world: we grieve for all that is being torn from our world, the species lost, the landscapes destroyed. Only if we can allow ourselves to feel the pain of the Earth, can we be effective in Her healing. This is why the Vietnamese Buddhist monk, Thich Nhat Hanh, has said that in order to heal the Earth,  “the most important thing that we can do is to hear, inside ourselves,  the sounds of the Earth crying”.

This workshop enables us to find an end to the illusion of separation and experience our rootedness in the living Earth.