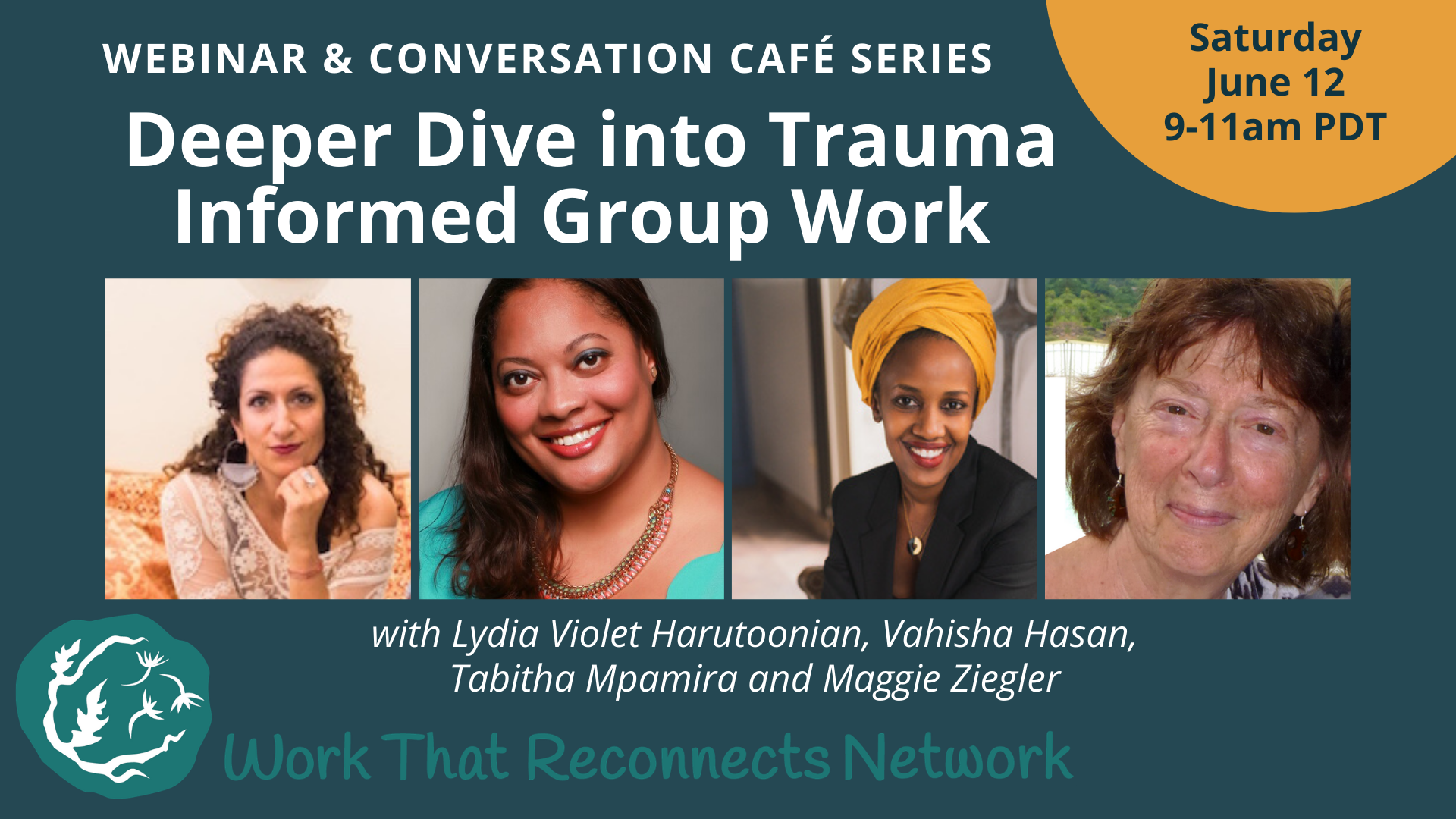 Facilitated by Lydia Violet Harutoonian, Vahisha Hasan, Tabitha Mpamira and Maggie Ziegler.
Following the inspiring panel on Trauma Informed Group work that we hosted on April 10th we received a flood of requests for a “part two” in order to journey deeper into this topic and to provide more opportunities to interact with other participants and the panelists. Here it is!
During this event our brilliant panelists will offer deeper insight into some of the most poignant topics referred to in the panel. Participants will have the opportunity to connect with each other and explore the topics in breakout sessions and enjoy a dynamic whole-group community discussion generated by participant questions.
In order for us all to enter this space together informed and nourished by the wisdom shared on April 10th we ask that all participants experience the first panel before attending this event. If you didn’t attend the April 10th event live (or if you want to refresh and recharge your connection to it) you can watch the recording of it here.
Register Here

Lydia Violet Harutoonian, MA, has studied dedicatedly with deep ecology elder and Buddhist scholar Joanna Macy for the past 12 years, learning how we can metabolize climate despair, eco-anxiety, and community traumas into energy for resilience, action, and community healing. She runs The Music As Medicine Project, a non-profit dedicated to creating access to Macy’s work, music, and music education as tools for cultivating resilient cultures in our communities. www.musicasmedicineproject.org

Lydia is also an Iranian-American multi-instrumentalist weaving together Southern blues, American roots, and Iranian folk music traditions. With her live band she combines fiddle, banjo, and luscious harmonies to offer a soul-folk revival experience, bringing in a fresh wave of protest music. In the past year she has collaborated with world-renowned artists Climbing PoeTree, Rising Appalachia, and Lyla June. ♬ www.lydiafiddle.com ♬ 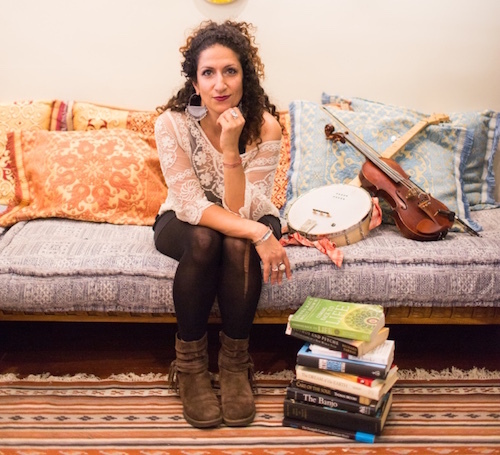 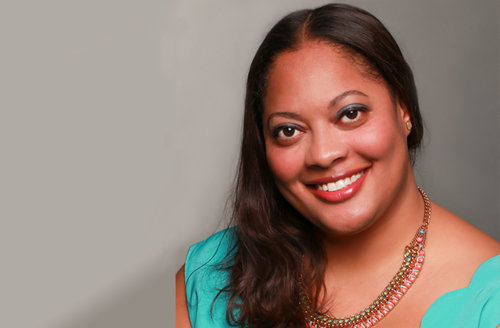 Vahisha Hasan is a faith-rooted organizer moving at the intersections of faith, social justice, and mental health. As Executive Director of Movement in Faith, Rev. Vahisha Hasan is deeply invested in ways activist and faith communities further healing and collective liberation. She is also the Rapid Response Coordinator for TRACC4Movements (Trauma Response and Crisis Care) and Director of SEAL Initiatives at American Baptist College (Social Justice, Equity, Advocacy, and Leadership).

She is a powerful public speaker, transformative facilitator, social justice trainer, minister, and writer with a deeply prophetic voice and imagination for how faith communities can be an active part of healing and collective liberation.

Tabitha Mpamira is a therapist, activist, motivational speaker, and consultant on sexual and gender-based violence with a long working history in the mental healthcare industry. In 2015, Tabitha founded EDJA to provide free medical, legal, and mental health services to survivors of sexual assault in East Africa. EDJA, now a program under Nyaka in southwestern Uganda, has sparked rapid change in rural Uganda by supporting hundreds of survivors and bringing perpetrators to justice.

Tabitha’s work in this area has been widely recognized and vividly depicted in the documentary Victors: Singing to the Lions, which has been screened globally, including at the United Nations Association of New York. She was recognized by Global Citizen in 2018 when she won the People’s Choice Waislitz Award. Tabitha has been invited to speak across the globe; recent examples include her speech at the Vatican about the urgency of working to end sexual violence and her widely viewed TEDx Talk on the transforming or transferring of trauma. Tabitha is currently pursuing a doctorate in clinical psychology with a specialization in sexual trauma after over 10 years of practice. 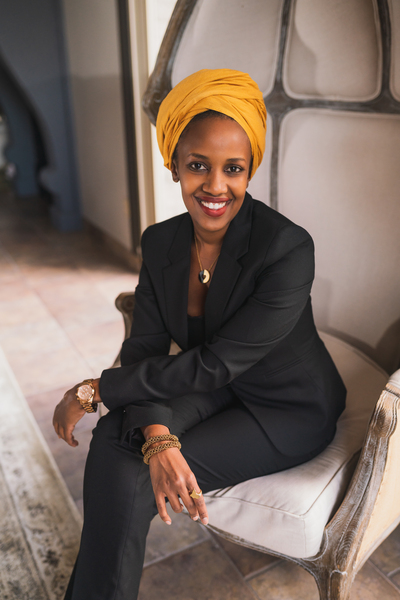 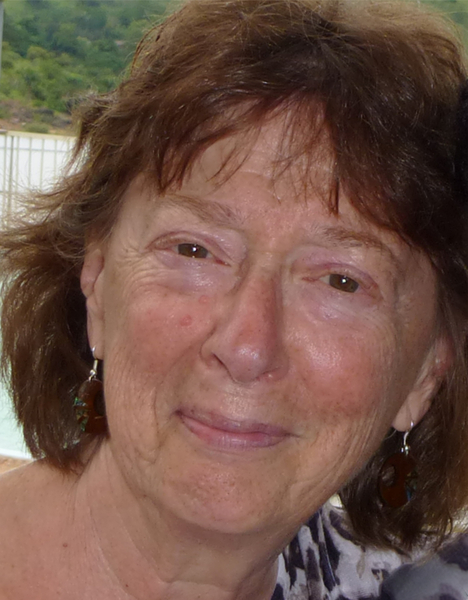 Maggie Ziegler, MA, has decades of experience as a trauma psychotherapist, group facilitator and community activist. She has developed curriculum, delivered training programs, and provided extensive consultation in the areas of violence against women, sexual abuse, refugees, immigrants, war and genocide and trauma generally. Varied international experience most recently included peace building projects in Rwanda, where she lived for several years, and in the Central African Republic.

Maggie is a long time facilitator of the WTR, which has also been integrated into her trauma work since she first encountered Joanna Macy’s writings in 1983. Over the past 20 years, Maggie has attended numerous trainings with Joanna Macy, and during this time she has also developed and delivered programs linking trauma psychology and ecopsychology.

Maggie’s journey involves walking the path of decolonization and examining the privilege of whiteness. She lives on Canada’s west coast, on the traditional territory of the Coast Salish people.