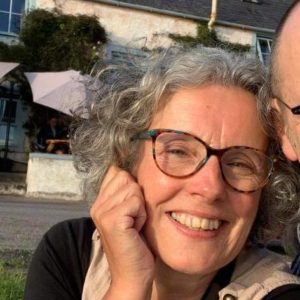 Please join us in welcoming our Facilitator of the month: Jacqueline Buckingham
Location: UK
Involved with the WTR since: 2007
Groups Jacqueline works with: community groups, environmental stewards, charities
Language: English

WTR Network: Jacqueline, could you share about your work? How did you become involved in the WTR and what role does it have in your life?

Jacqueline: I got involved with the Work that Reconnects in 2007 when I was living in Australia. I was introduced to the work of the Pachamama Alliance (in particular a powerful program called ‘Awakening the Dreamer, Changing the Dream’). During that introduction they showed a video where Julia Butterfly-Hill asks “when you say you’re going to throw something away – where’s away?” That was such a simple and yet powerful statement. I knew I had to train to lead that program. The program itself is grounded in the work and exercises of the Work that Reconnects, and that’s where I first experienced it for myself. I found the tools of WTR so powerful – inviting personal enquiry and reflection, allowing us to see those unconscious and unexamined assumptions about humans and our place in the world. I have been involved ever since! I led the Awakening the Dreamer programs in Australia and the UK, I joined the board of directors of Be The Change in Australia and the UK, I led one-day and two-day workshops, and trained other facilitators. I still lead Active Hope and Work that Reconnects programs in-person (at Findhorn) and now online too.

WTR Network: What are you grateful for in the WTR world?

Jacqueline: I am grateful for these tools, which allow us to gently open up to inquiry, self-reflection and new ways of seeing and experiencing the world.  They do it powerfully, without a sense of being confronted or challenged, which in my experience allows the ‘newbie’ to embrace them without a need for defense.  I am also grateful for the Active Hope book which is an easy way to dip into the material and find the tools I need in the moment.  Also the WTR website with the resources so easily laid out.

WTR Network: What challenges and struggles have you experienced as a facilitator of the WTR?

Jacqueline: In the early days people were not ready for these conversations. Some of the information that we would give to people was too painful for them to hear, and we had people walk out of workshops many times. Or they would argue with us and justify why things are fine as they are. Over the past 15 years, I have seen a big change, which is encouraging as it tells me that people are more open and willing to hear the truth. And that’s the best place from which to do something about changing things!

WTR Network: What has been the most difficult moment in your journey through the WTR?

Jacqueline: My most difficult moment was when some of the participants in a WTR course I was running wanted the program content to change in order to focus on a topic that had recently come up in the news. The rest of the group wanted to go ahead with the program as originally designed. Both sides were quite vociferous and it got pretty heated for a moment. It was a delicate negotiation, finding a way forward for both sides that allowed both sides to feel heard and acknowledged.

WTR Network: What has emerged for you since you started facilitating the WTR?

Jacqueline: I love how this work empowers others to really believe in themselves, to know that they can make a difference instead of waiting for others (big corporations and governments), and then to take actions towards what they believe in.

WTR Network: What recommendations do you have for new facilitators?

Jacqueline: Get to know the material well, so that it is ‘in’ you – that way you have the freedom to dance and move and change as the needs of the group require.

Jacqueline: Morning meditation. It grounds me and connects me to a greater wisdom in the universe – and from there I connect with my own essence self.

Learn about The Work END_OF_DOCUMENT_TOKEN_TO_BE_REPLACED

Connect with other WTR users and facilitators. END_OF_DOCUMENT_TOKEN_TO_BE_REPLACED

Find experienced facilitators of the Work That Reconnects in your region. END_OF_DOCUMENT_TOKEN_TO_BE_REPLACED

Find out about WTR projects. END_OF_DOCUMENT_TOKEN_TO_BE_REPLACED