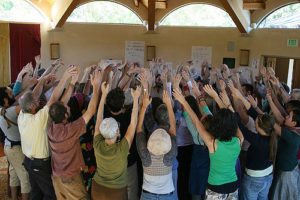 The Elm Dance – by Joanna Macy

Around the planet, as people gather to work together for the healing of our world, a simple, beautiful practice is spreading. To celebrate their commitment to life and solidarity with activists the world over, they join hands in a circle dance.

Set to the haunting strains of a Latvian song by Ieva Akuratere, and choreographed by Anastasia Geng, the Elm Dance took form in Germany in the 1980s. The original name of the song is Kā Man Klājas? (question mark included). In 1992, having learned it from my friend Hannelore, I took the Elm Dance with me to workshops I was leading with a Russian- speaking team in areas poisoned by the Chernobyl disaster. There, and especially in Novozybkov, the most contaminated of inhabited cities, the dance became an expression of their will to live. It was here the dance evolved a distinctive form with the raising and swaying of arms, evoking their connection with the trees they so loved.

When I was with the people of Novozybkov, I made them a promise: to tell their story wherever I went. In keeping that promise, I shared the Elm Dance. Then, in a way that no one could have imagined, the dance in this form began to spread, beyond all reckoning, with a momentum of its own, and became associated with The Work That Reconnects. We have come to realize that the dance gives activists and lovers of life the world over a tangible way to feel their bone-deep commitment and their solidarity with each other across the miles.

The Story of the Elm Dance

There is a circle dance we do in every workshop and class I teach, whether it’s on systems theory, Buddhism, or deep ecology. We do it to open our minds to the wider world we live in and strengthen our intention to take part in its healing. Each time we put on the music and link hands, I think of Novozybkov in the fall of 1992.

Our team of four, Fran and I and two Russians, had been traveling from one town to another in Byelorussia and Ukraine, offering workshops to people living in areas contaminated by the Chernobyl disaster. Now we had come to this final town in Novozybkov, an agricultural and light industrial city of 50,000 a hundred miles east of Chernobyl, in the Bryansk region of Russia.

Drawing on what we learned from years of leading despair work, we came to offer, as we put it to the authorities, “psychological tools for coping with the effects of massive, collective trauma.” We had entitled the workshops Building a Strong Post-Chernobyl Culture. The name had a nice Soviet ring to it, but I soon realized that the word “post” was in error. “It suggests that the disaster is over,” I said to Fran, “but it has become obvious to us that it isn’t over. It compounds itself through time in vicious circles, in positive feedback loops.” The radioactivity was still spreading silently through wind, water, food, creating new toxins as it mixed with industrial pollution, and sickening bodies already weakened from previous exposures. Our workshops, we soon realized, were meant not to help people recover from a catastrophe, so much as to live with an ongoing one.

It was Harasch who insisted that we come to Novozybkov. A Russian psychologist practicing in Moscow, he had flown to Chernobyl within hours of the accident, to give support to the operators of the doomed reactor. In the six years that followed, he traveled to towns throughout the region to help the survivors, and none had touched his heart more deeply than this city and its fate.

On the train, as we headed East from Minsk toward the Russian border, he pulled out the map and told us the story once more. The burning reactor was a volcano of radioactivity when the winds shifted to the Northeast, carrying the clouds of poisoned smoke in the direction of Moscow. To save the millions in the metropolitan area, a fast decision was taken to seed the clouds and cause them to precipitate. An unusually heavy late April rain, bearing intense concentrations of radioactive iodine, strontium, cesium, and particles of plutonium, drenched the towns and fields and forests of the Bryansk region, just across the Russian border from Chernobyl. The highest Geiger counter readings were measured, as they still are, in and around the agricultural and light-industrial city of Novozybkov. “The people there were not informed of their government’s choice, who wants to tell people they’re disposable? By now it’s common knowledge that the clouds were seeded, but it is rarely mentioned. And that silence, too, is part of the tragedy for the people of Novozybkov.”

Instructions For the Elm Dance

Evolved in Solidarity with the People of Novozybkov

Circle up with plenty of room to move, holding hands. If the numbers are too great to form a single circle, make concentric circles with about one large step of distance between them.

It does not matter when in the music you begin the dance, except to start on a beat. The dance consists of four beats of movement, alternating with four beats of swaying in place. When swaying in place, imagine that you can feel the energy from the heart of the Earth spiraling up through the floor into your body. When the energy reaches the heart chakra, send it out for the healing of the elms and all beings. This is an act of intention. Anastasia Geng who created the dance from the Latvian song, said the purpose of the dance is for building strong intention.

The circle moves counter clock-wise (to the right). Always begin with the right foot. Start by taking four steps backward (to the right). After four beats of swaying in place, the next four steps are facing forward, still moving counter clock-wise. Then, after the next four beats of swaying in place, move four steps toward the center of the circle, raising your arms high and unlinking hands so they can wave like boughs of a tree. Remember to sway for four beats, then move four steps back from the center and continue in this fashion until the music breaks midway. In the silence before the music resumes, the leader reminds the dancers that throughout the second half of the dance they can call out by name those parts of our world – beings, places, institutions – for which they desire healing.

Learn about The Work END_OF_DOCUMENT_TOKEN_TO_BE_REPLACED

Connect with other WTR users and facilitators. END_OF_DOCUMENT_TOKEN_TO_BE_REPLACED

Find experienced facilitators of the Work That Reconnects in your region. END_OF_DOCUMENT_TOKEN_TO_BE_REPLACED