You are here: Home / Blog / Article / The Ones We Dance For: An Appeal

Dear Friends in the Work that Reconnects,

If you’ve been with me in the Work That Reconnects, chances are that you danced the Elm Dance, and heard me tell how it connects our work to a band of valiant Russians protecting life in the poisoned shadow of Chernobyl.  Perhaps you read their story in my memoir, Widening Circles, or my little book Pass It On, or chipped in to help them buy radiation monitors for their farmers and school teachers. 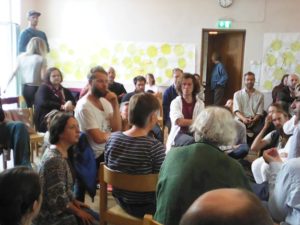 I write now to ask for your support of this brave nongovernmental organization.  Based in Bryansk, the region of Russia that is closest to, and most contaminated by, the Chernobyl disaster, its name is Viola (Russian for violet).  Over nearly 30 years, Viola’s founder-director Ludmila Zhirina, former biology professor at the regional teachers training college, has woven together a network of school principals and teachers, doctors and lawyers, farmers and young people.  Its purpose is two-fold:  1) to help people monitor the ongoing radioactivity of soil, food, bodies, and housing; and, 2) to educate them in ways to care for their health and morale—ways that range from gardening and diet to Deep Ecology workshops (the earlier name for the Work That Reconnects).  From their experience, Ludmila wrote a book, Living with Radiation, sending it later to survivors of Fukushima. Viola’s beat includes Novozybkov, the most contaminated city of its size that is still inhabited, and the site of the 1992 workshop where I made the promise that led to the Elm Dance’s ongoing presence in our work.

When radionuclides from the 1986 Chernobyl fires encircled the world, with a human death toll now estimated at one million, massive amounts of radioactivity were also absorbed by trees and swamp vegetation in the surrounding region, turning it into the “exclusion zone.”  Twenty-eight years later, in 2014 and on into 2015, due to the effects of Global Warming, a nightmare scenario unfolded:  peat bogs caught fire, then miles-long walls of flame tore into the toxic forests.  Smoke-laden winds carried the poisons far and wide.  New areas were contaminated.  More villages around Novozybkov were evacuated.  “This is the second Chernobyl,”  wrote Ludmila. “My son and I weep at the computer.” 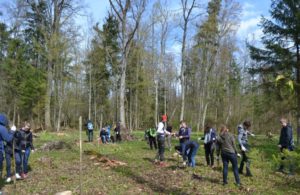 This time little notice of the tragedy was taken in Russia or here in the West.  President Putin, embracing pro-nuclear policies, views environmental organizations concerned with nuclear contamination as inimical to national interest.  If these organizations receive any foreign funding they are now listed as “foreign agents” and a number have been shut down. Viola, registered as an educational rather than an environmental organization, is not blacklisted in this way.  Far from being intimidated, it continues unabated, welcoming more local professionals and scientists into its ranks, especially since the “Second Chernobyl.”  Now not only in Bryansk but across the country in places as far as Kaliningrad where new nuclear power stations are being built, and Murmansk, long-time center for nuclear submarines, Ludmila and her colleagues continue tirelessly to carry on with workshops and round-tables teaching people how to measure the radiation and monitor their own health, how to clean soil with worms and grow their own food, how Deep Ecology practices lessen stress, build confidence, and harmonize relationships.

I make this appeal for Viola,  because while Ludmila and her network have lots to do and much to share, they have precious little cash to do it with, often traveling and printing teaching materials at their own expense.  Grants from organizations and foundations are out of the question.  Therefore, I have made my occasional gifts to Viola in a person-to-person manner, from me to Ludmila Zhirina, using a 501c3 in Portland, Oregon as a tax-free conduit.

Betsy Toll, director of Living Earth Gatherings, has supported Viola over the years by passing on, via Western Union, the donations she receives.  If, as I hope, you’re inspired to follow suit,tax-deductible donations can made online through Living Earth at http://www.livingearthoregon.org/donate/. Please note “Viola” when you make your donation!

You can also send a tax-deductible check made out to ‘Living Earth Gatherings’, to Betsy Toll, P.O.Box 86960, Portland OR 97286, writing ‘Viola’ on the memo line.  Add your email address so that Betsy Toll can convey it to Ludmila, who can then respond and keep you informed.  Ludmila can be reached directly at [email protected].  You may enjoy this connection as much as I have.

Yours in love and solidarity for the healing of our world,

Learn about The Work END_OF_DOCUMENT_TOKEN_TO_BE_REPLACED

Connect with other WTR users and facilitators. END_OF_DOCUMENT_TOKEN_TO_BE_REPLACED

Find experienced facilitators of the Work That Reconnects in your region. END_OF_DOCUMENT_TOKEN_TO_BE_REPLACED

Find out about WTR projects. END_OF_DOCUMENT_TOKEN_TO_BE_REPLACED