This profile is not complete.
You are here: Home / Users / Aravinda Ananda 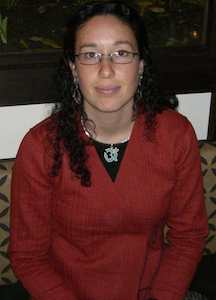 Aravinda Ananda is a social ecologist and is currently finishing her forthcoming book called Living rEvolution. She has studied numerous times with Joanna Macy since 2008 and in the past six years has been deepening in her facilitation of the Work That Reconnects. She has been a part of many co-facilitation teams including for the 2014, 2015, and 2016 Earth Leadership Cohorts – an immersion in the Work That Reconnects for young adults; and the 2015 Community Leadership Cohort – an exploration for individuals interested in establishing or deepening local WTR communities of practice. In spring 2015 she helped to establish an ongoing practice group in the Boston area. She is a member of the Interhelp Council - a northeast US regional WTR network and also helped to launch the global Work That Reconnects Network. She is on the editorial board of the Deep Times Journal and is currently most passionate about learning with other facilitators how to integrate anti-oppression awareness and approaches more deeply into Work That Reconnects facilitation.

I have co-facilitated several Work That Reconnects weekend workshops at Starseed Healing Sanctuary located in Western, MA where I am a partner, but I have also done a lot of facilitation in the Boston area where I live.

I typically co-facilitate with my husband Joseph. We have offered perhaps a dozen introductory workshops together ranging in time from an hour and a half at the Bioneers By The Bay conference, to day-long workshops at the Friends Meeting House, The Unitarian Church, and Cohousing in Cambridge, MA. We have also offered day-long workshops for the New England Pachamamas - a group of Awakening the Dreamer Facilitators (have done the facilitator training for the Symposium).

In 2015 I helped to start a monthly practice group in the Greater Boston area. We usually meet monthly and it is an opportunity for people to practice their facilitation skills. When the group first started, my husband and I did a lot of the facilitation.

In September 2015, we led a Community Leadership Cohort that attended Joanna's September workshop at Rowe, and continued on for two additional days. The group explored starting a community of practice in their own local area and also some aspects of integrating anti-oppression awareness and approaches into facilitation.

In May 2015, I co-facilitated the first two and a half days of a five-day retreat at Rowe, MA. Joanna arrived and facilitated the second part of the retreat.

In April 2016, I was on a co-facilitation team of four that offered a five-day workshop at Friendly Crossways in Harvard, MA.

My husband and I have also collaborated with writing teacher Louise Dunlap three of the last four years to offer a joint Work That Reconnects and writing workshop.