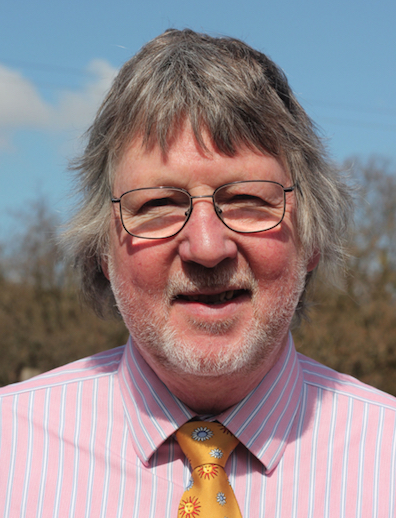 Having been a member of the UK Deep Ecology core group in the 1990s, I trained with Joanna at two intensives: one at Schumacher College in the late 1990s and one that I organised for her at Plas Taliaris, in Carmarthenshire in West Wales in 2000. At Plas Taliaris I also arranged and attended an intensive with John Seed who developed, with others, the Council of All Beings activity.

I have facilitated the Work that Reconnects both in Wales, and in Devon, UK, where I now live, the last time in 2014. As a youth and community worker I was the principal founder of the Meanwood Valley Urban Farm in Leeds. Through that I discovered Earth Education, and continued practising environmental education while working subsequently as a forestry manager, latterly as a Forest School leader. My interest and involvement in ecoliteracy led me to a Master’s degree in Education by Research (2012/13).

As a burnt out community worker I needed psychotherapy, then trained and practised in Reichian Character Analysis and Bodywork.. Having retired from land-based work – I was until recently running a Social and Therapeutic Horticulture project – I am returning to therapy and healing, having retrained as a healer. I am currently training in both Touch for Health and Systemic Family Constellations; and have done nature constellations workshops with both Jenny Mackewn and Melisa Roussopoulos and .

What else? I have Buddhist training, for nearly 12 years as a student of John Garrie Roshi. I enjoy cycling and walking. I am making more time now for storytelling, and drama, and am currently developing some work with people in later life, having done some work already using a form for story-making with people with a dementia.