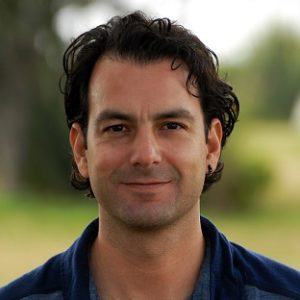 Adrián Villasenor-Galarza, PhD, is located in Santa Fe, NM and Guadalajara, Mexico. Adrián has been involved with the WTR since he started applying the WTR principles and practices in 2005, yet it wasn’t until early 2009 that he met Joanna.

What groups do you work with? Mainly Latin American groups, academia, and indigenous communities.

How many workshops and/or events WTR focused do you run a year? About 2 or 3 ten-day intensives per year, and a handful of weekend workshops, conferences, and talks.

Are you part of a hub? We’ve been developing a network of WTR nodes in Mexico, Chile and more recently Brazil, primarily connected by what we’ve been calling the “Inner Resilience Network of the Americas.”

Are other facilitators in your area? Who are they? Not sure, as I just moved to Santa Fe, NM. However, out of the 4 WTR intensive trainings in Mexico and Chile, there are a number of people who are beginning to offer workshops.

Do you have any upcoming events you’d like to share? Yes, and I’m yet to post it to the website. The event is the upcoming summer intensive in Mexico. Here’s the event’s link: http://www.eltrabajoquereconecta.org/mexico/

Are you available for mentoring others? I’d like to. Not sure at this very moment, as I’ll become a dad any day now! So probably some time after the little one’s birth.

How can people starting in their facilitating path connect with you for mentoring? Email is best: [email protected]

Tell us a bit about yourself, how did you become involved in the WTR and what role does it have in your life? I’m passionate about human transformation in service of the Earth in order to uncover the regenerative expression of our deep potentials.

I was born and raised in México, which means that my mixed heritage has called for a deepening and integration within myself of both old and new, up and down, North and South. I have also been fortunate enough to travel and live in different places and countries for roughly half my life. This has helped build an encompassing and integrative approach to many cultural, spiritual, and ecological issues.

I first heard of the WTR while in Schumacher College back in late 2004. And it was until my return to Mexico in 2005 that I started offering workshops and implementing some WTR practices. A few years after (2009), I found myself taking a graduate class at CIIS (California) with Joanna and Sean Kelly. It was then when Joanna asked if there was someone in the room who’d like to translate Coming Back to Life into Spanish. That was the beginning of a beautiful experience working closely with Joanna to release the first Spanish translation of the manual in 2010. As a grad student I started offering a few WTR events and attending various trainings with Joanna, but it was after graduation that I officially began offering WTR workshops in Mexico, California, and elsewhere. Earlier this year I completed the updated translation of Coming Back to Life.

The Work has become a central pathway of creative expression and fulfillment in my life, characterized by joy that comes from working on behalf of the welfare of the whole, of the Earth community and future generations.

What are you grateful for in the WTR world? Most of all, I’m deeply grateful for the sense of community nurtured by the WTR, and the fortune of witnessing how, through the Work, people unfold their own necessary medicine to share in this precious time. I’m sincerely grateful to Joanna, of course, and all the minds and hearts that have shaped such a transformative group work methodology.

What challenges and struggles have you experienced as a facilitator of the WTR? Primarily the financial side of things, along with the novelty of the Work itself. A good number of people have never heard from the WTR before, which calls for creativity and adaptability at the time of putting our re-connective offerings out there.

What has been the most difficult moment in your journey through the WTR? I remember a few tears back when I was particularly depressed about the state of affairs, but was scheduled to offer a training to university professors. I felt I was far from my best at facilitating, however, the participants’ response was overwhelmingly positive. This made a mark within me. The Work’s self-organizing wisdom and compassion really works!

What has emerged for you since you started facilitating the WTR? Creative potential. I sometimes share that the WTR has significantly allowed me to better express myself in the world, by providing a time-tested, archetypal framework from which to derive sustenance and guidance. Thus, an expanded sense of gratitude for the gift of life has ensued, along with a growing trust in what I’m able to offer to the world.

What are your next steps in this Work? Through offering the Work, I’ve learned what my “ecological niche” is. I’m more and more interested in taking the WTR to different places, especially throughout Latin America, but also other parts of the world. In particular, I’d like to keep offering WTR intensives and planting seeds for others to develop their own gifts, informed by the WTR. I’m equally interested in my continued exploration of integrating the Work with other modalities and teachings.

What would you say to someone who is new to the WTR? “You’re in for a treat.” It’s not only a precious gift to peel-off layers of indifference and apathy to rest in the realization of who we are as human Earth, but this task is an urgent cultural and historical necessity. The WTR is a wonderful ally in the much-needed paradigmatic shift.

What recommendations you have for new facilitators? It’s said that one of the best ways to learn is to teach. My recommendation for new facilitators is to trust the innate wisdom of the WTR and let it guide you. This is not only a matter of surrendering, it calls for diving deeply into the materials at hand and making them your own, let them do their magic within, and then let me freely roam the world. If you notice that the Work seems to go at its own accord, then you’re doing something right.

Do you have a favorite practice? Why? Probably the Deep Time practices. I’m often witness of how sweetly these practices contribute to widen people’s sense of self and nurture and equally expanding love for themselves and each other. I also have to say that the Truth Mandala and the Despair Ritual are amongst my favorite practices due to the still rare opportunity to communally and fruitfully delve into our own darkness and be born anew with fresher, kinder eyes.

Anything else you want to share with us? Yes. Share about an anthology we published in Spanish back in 2015 that brings together different Latin American voices in service of the Great Turning. By doing so, we explore the role of the WTR in the Spanish-speaking countries of the Americas. Here’s the link to the anthology.

Learn about The Work END_OF_DOCUMENT_TOKEN_TO_BE_REPLACED

Connect with other WTR users and facilitators. END_OF_DOCUMENT_TOKEN_TO_BE_REPLACED

Find experienced facilitators of the Work That Reconnects in your region. END_OF_DOCUMENT_TOKEN_TO_BE_REPLACED

Find out about WTR projects. END_OF_DOCUMENT_TOKEN_TO_BE_REPLACED