You are here: Home / Blog / Article / Living the Spiral: An interview with Molly Brown 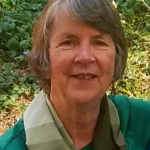 This month we feature Molly Young Brown, whose contributions to the Work That Reconnects – including co-authoring Coming Back to Life – span decades. We join Molly in celebrating her 80th birthday, and with grateful hearts we honor her as she retires from her role as a Weaver of Work That Reconnects Network. Volunteer Kelsey Eaton interviewed Molly; this is what she learned.

Living the Spiral: An interview with Molly Brown
By Kelsey Eaton

Molly grew up in Los Alamos, New Mexico, USA, where she spent most of her time playing in the nearby mountains and canyons, and camping with her family. A fledgling activist, Molly, along with her friends, founded the Good Deeds Booster Club to help raise money for important causes and to help elderly neighbors with household chores – like picking dandelions out of their yards.

In the years before her family moved there, scientists and engineers of the Manhattan Project at the Los Alamos Scientific Laboratory succeeded in weaponizing the atom, and the world’s first atomic bomb was detonated on July 16, 1945. Growing up surrounded by “Doctorates” working at Los Alamos, Molly was attuned to the conflict the atomic bomb caused throughout the United States and the world.

In her early twenties, Molly, with her husband Jim, moved to the San Francisco Bay area, both for the cultural diversity and also to continue their education at San Francisco State College. Molly completed teacher training and taught pregnant and parenting teens who were not allowed to attend high school. During this time, systemic racism and white supremacy were not widely discussed. Most of Molly’s students were Black, and she and her co-teacher adjusted the course materials to focus on Black writers such as Eldridge Cleaver, Malcolm X, and Richard Wright. Molly was committed to addressing issues of racism and meeting people where they were at in life.

In May 1969, when Molly was pregnant with her second son and still teaching pregnant and parenting teens, the battle for People’s Park occurred in Berkeley. This violent showdown between activists and law enforcement contributed to Molly and Jim moving their family back to New Mexico, safely away from this conflict.

In 1986, the family returned to California, and Molly’s interest in peace psychology led her to join the local Interhelp gathering. Molly recalls her initial reaction: “They were doing this stuff called Despair Work, and it seemed very weird to me. I couldn’t understand it, but I was intrigued, mostly by the amazing people.” Molly met Joanna Macy during a Nuclear Guardianship workshop in 1990. Molly felt a “karmic relationship” with Joanna, and a strong sense of responsibility to be involved in the anti-nuclear movement, due to her upbringing in Los Alamos. She joined the Nuclear Guardianship Project and deepened her relationship with Joanna, serving as a Teaching Assistant for Joanna’s classes at the California Institute of Integral Studies and supporting Joanna’s 10-day intensives.

In 1995, Joanna asked Molly to co-author the updated version of Despair and Personal Power in the Nuclear Age to address issues beyond the anti-nuclear movement. Their collaboration evolved into a distinct book, Coming Back To Life, published in 1998, a foundational text for the Work That Reconnects.

Molly recalls, “For the longest time, I was trying to be a Joanna Macy clone. I was trying to do the Work the way I saw her do it … and I’m not Joanna. I have a very different personality. And somewhere along the line, I got that I couldn’t be a Joanna Macy clone. I want to say to everybody, ‘You know, you have to find your own style and way of doing the Work. You can’t try and imitate somebody else whom you admire.’”

Molly reminds us that “the Work is not meant to be forced on people, nor are facilitators meant to be missionaries. When people are ready for the Work, it is here, and it is okay if others aren’t interested. Plenty of people are just waking up and are starting to look around and say, ‘what the hell?’ and those people will benefit from the work. If they can find a workshop, they’re going to just be so grateful.”

In 2016, having facilitated the Work That Reconnects for 30 years, Molly realized how important it is for people leading the Work to learn facilitation skills as a foundation for creating truth-sharing spaces. Her inspiration to develop WTR facilitator training coalesced when she collaborated with Constance Washburn, who served as a driving force for making the program available to the public in partnership with Mutima Imani. The Spiral Journey Facilitator Development Program welcomed its first cohort in 2017, and with Mutima’s guidance, the program emphasized the importance of social justice and anti-racism work within the Work That Reconnects.

The Deep Times journal also grew out of Molly’s inspiration and effort, and her collaborative efforts were key to the development of the Work That Reconnects Network from its beginning.

Dreaming of how the Work might evolve in the next 50 years, Molly says, “I would like it to be so much a part of life that it no longer exists as something you could identify as the Work that Reconnects. Schools would have regular sessions where kids could talk about their feelings about what’s going on in the world. The values, assumptions, and practices would become integrated throughout society.”

What message does Molly have for those just being born? “You deserve to be alive just by virtue of having been born. I want each of you to be treated with dignity and unconditional love. I want you to receive support for who you are, for who you want to become, and for how you want to blossom. You’re like a plant, and you get watered and fertilized and sheltered when you need to be. You grow up knowing that you’re good, that you’re valuable, and that you have many gifts to give the world, even if you don’t know yet what they are. You’ll find ways to offer these gifts that work for you.”

Upon Molly’s return from her sabbatical, she intends to continue working with the Facilitator Development Program and Deep Times journal. She is also interested in starting an active advisory council with Elder facilitators to make themselves available for the Network Weavers team. She shares excitement and relief, knowing she doesn’t have to carry it all, and that there is a web of people committed to supporting and expanding the Work That Reconnects.

Learn about The Work END_OF_DOCUMENT_TOKEN_TO_BE_REPLACED

Connect with other WTR users and facilitators. END_OF_DOCUMENT_TOKEN_TO_BE_REPLACED

Find experienced facilitators of the Work That Reconnects in your region. END_OF_DOCUMENT_TOKEN_TO_BE_REPLACED

Find out about WTR projects. END_OF_DOCUMENT_TOKEN_TO_BE_REPLACED